Sadly this year, I’ve suffered from a few injuries that have considerably limited the activities that I and consequently, we, have been able to do. Last autumn, I developed Achilles tendonitis, which took months to improve enough to go back to vigorous activity. Then early in the summer, as I was trying to regain my lost fitness, I started doing a little trail running, which I was really enjoying, until I sprained my ankle in the woods – the same ankle that had suffered with the tendonitis.

I am aware that neither of these were particularly serious injuries compared to many, but they were enough to have a fairly large impact on our life. As a result, we have had quite a different year to previous years and have had to adapt our adventures accordingly.
I was very upset about spraining my ankle: I had finally been recovering from the tendonitis, I was running again, climbing well and had climbed my first munro in six months when it happened, and so I felt extremely frustrated and angry. I knew that the next six months were not going to be as I had imagined and our summer climbing ambitions were ruined. 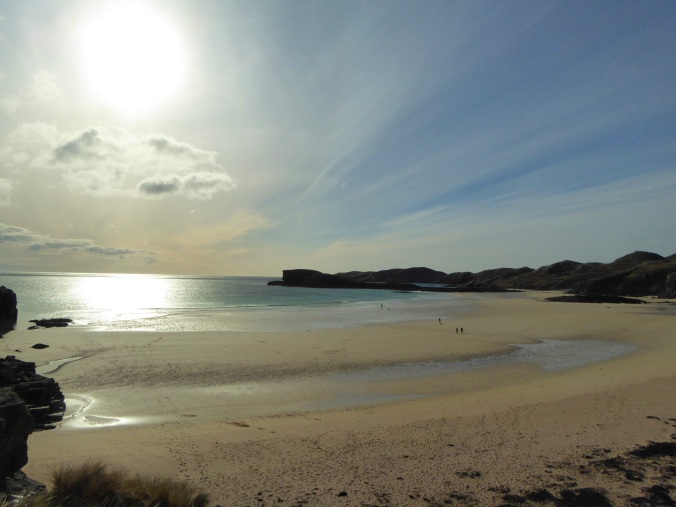 Oldshoremore: one of our favourite beaches on our North West Scotland trip. We had the shortest coldest swim ever, amusing some other tourists, and warmed up with hot chocolates and this view!

It made me realise how much these outdoor activities have become a part of my life, a part of our relationship, and how much of an impact it would have, were that to change. I have read about people who can lose their positivity, their sense of purpose and even their sense of self after injury, and that worried me: I hadn’t had to think about that before. 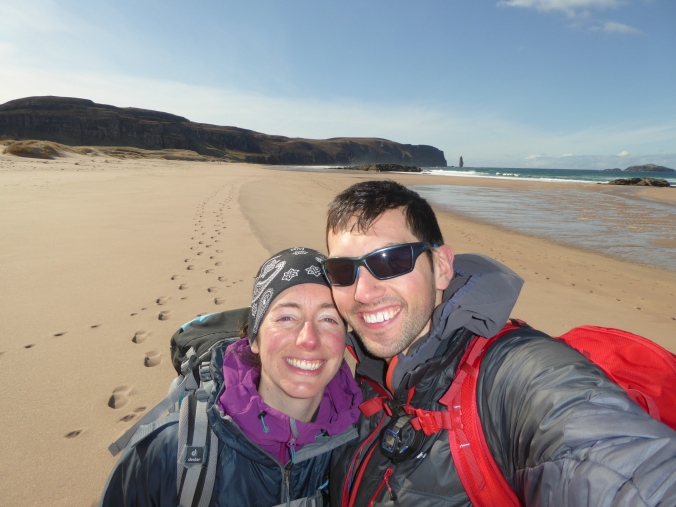 We found less strenuous walking routes, like this walk to the stunning Sandwood Bay, which was quiet in March. We had soup on the beach and Chris did some bouldering

Fortunately for me though, we adapted, and since I wasn’t completely out of action, we have actually ended up broadening the range of activities we do.
So although we haven’t had such a typically adventurous year as usual, by adjusting our aims and expectations and finding alternatives, we have still been able to enjoy ourselves. At Easter, when we went to the North-West of Scotland, rather than do all the classic mountain walks, we climbed Stac Pollaidh (short but steep!), did a tiny bit of climbing, a tiny bit of icy sea swimming but mostly explored, and drank hot chocolate or beer on stunning, chilly beaches in our down jackets.

Our summer climbing holiday to Snowdonia, turned into an afternoon of climbing, a swim in Llyn Idwal and lots of hanging out on Gower beaches, swimming and bodyboarding (which seemed to work wonders on my recovering ankle!).

When sickness and injury prevent you climbing mountains, why not swim instead?! Like here in Llyn Idwal in Snowdonia

Exercising makes me feel good, so I was worried that my mood would drop when I wasn’t able to do my usual things. However, I had started a little weight training to help my climbing before any of this happened and although it’s not an outdoor activity, it was something that I was able to continue doing throughout, simply by adjusting my routine as necessary, which kept my moral up and has meant that, surprisingly, my climbing hasn’t deteriorated badly as I worried it might.

We learnt to relax on the beautiful Gower beaches

I also found that cycling was, after the sprain, much easier than walking, so getting around to see friends wasn’t too problematic. Importantly though, the acquisition of two second-hand mountain bikes has provided a whole new dimension to our adventures and a fantastic way to get out into the hills and woods when walking wasn’t an option. This has meant that during the last few months, I’ve still been able to get out into the environment that I love, explore areas we wouldn’t have gone to otherwise, work hard and feel adventurous! We love it and definitely won’t be giving it up anytime soon! 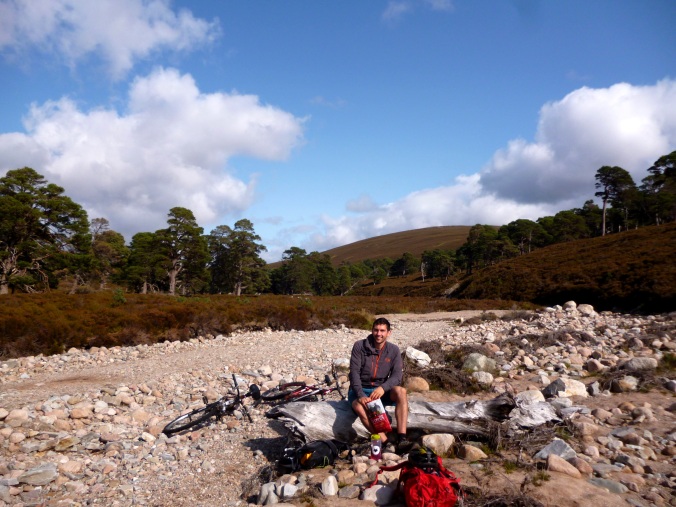 We discovered that mountain bikes are a fantatstic way to travel in the Cairngorms!

And last weekend, I climbed my first mini mountain, the Pap of Glencoe – much steeper than we imagined – without too much difficulty, so hopefully I’m back to being mountain-worthy again!