If you needed reminding how beautiful Scotland is, a day like last Sunday would do it!

For us it started at 7am in the van above Loch Tulla, where we had tinned spaghetti and sausages for breakfast, with the sun shining on a frosty landscape, below a perfectly blue sky.

Our breakfast view out of the van door: Loch Tulla and Beinn an Dothaidh

We set off to climb Beinn Achaladair and Beinn a Chreachain at about 9am from the car park just off the A82. It was -3 degrees and we were wearing all of our layers! Having walked for 20 minutes and just passed Achallader farm, we realised neither of us had a compass, so Chris had a nice early jog back to the van while I sat and watched the lapwings in the sun, which was just starting to warm up.

The path continues through fields along the base of the glen until it crosses an old bridge just below a ruined farmhouse. Land rover tracks then take you above the Water of Tulla on the north side opposite a lovely remnant of old Caledonian forest.

Chris checking out the collapsed bridge

A tiny cairn and a faint path mark the spot to leave the track and descend to the river. The bridge has been washed away so the river is not passable in spate. The water wasn’t high on Sunday, but it also wasn’t really warm enough for me to be very happy about taking my boots and socks off to wade across the river – the cold left me breathless and unable to speak for a minute or two when I reached the other side!

The Water of Tulla and Beinn Achaladair

The faint path continues up through the woods on the other side, gradually fading as you reach fenced areas. After a bit of meandering we found the tiny underpass (even I had to bend down!) under the railway and started to climb more steeply between the Allt Coire an Lochain and a deer fence. Behind the fence, the forest is regenerating well, demonstrating the impact high numbers of deer and sheep have on this landscape.

To the right (west) Beinn Achaladair looked very impressive above the lovely old Scots pines, with snow still shining in the gullies. To our left the Allt Coire an Lochain bounced, sparkling down layers of flat rock steps. We picked one of these steps that was warm and dry for our first sandwich stop (cheese and chilli jam) before crossing to the other side.

The climb up the grassy slopes on the left (east) of Coire an Lochain to the bealach is relentless, but was redeemed by the magnificent view across Rannoch Moor that was gradually revealed with each pause and, higher up, looking down on Lochain a’ Chreachain, which, still in the shade, retained it’s layer of ice.

Upon reaching the bealach we had the wonderful realisation that we were surrounded in every direction by mountains as far as we could see! It was fantastic and something that I have never experienced in England or Wales. 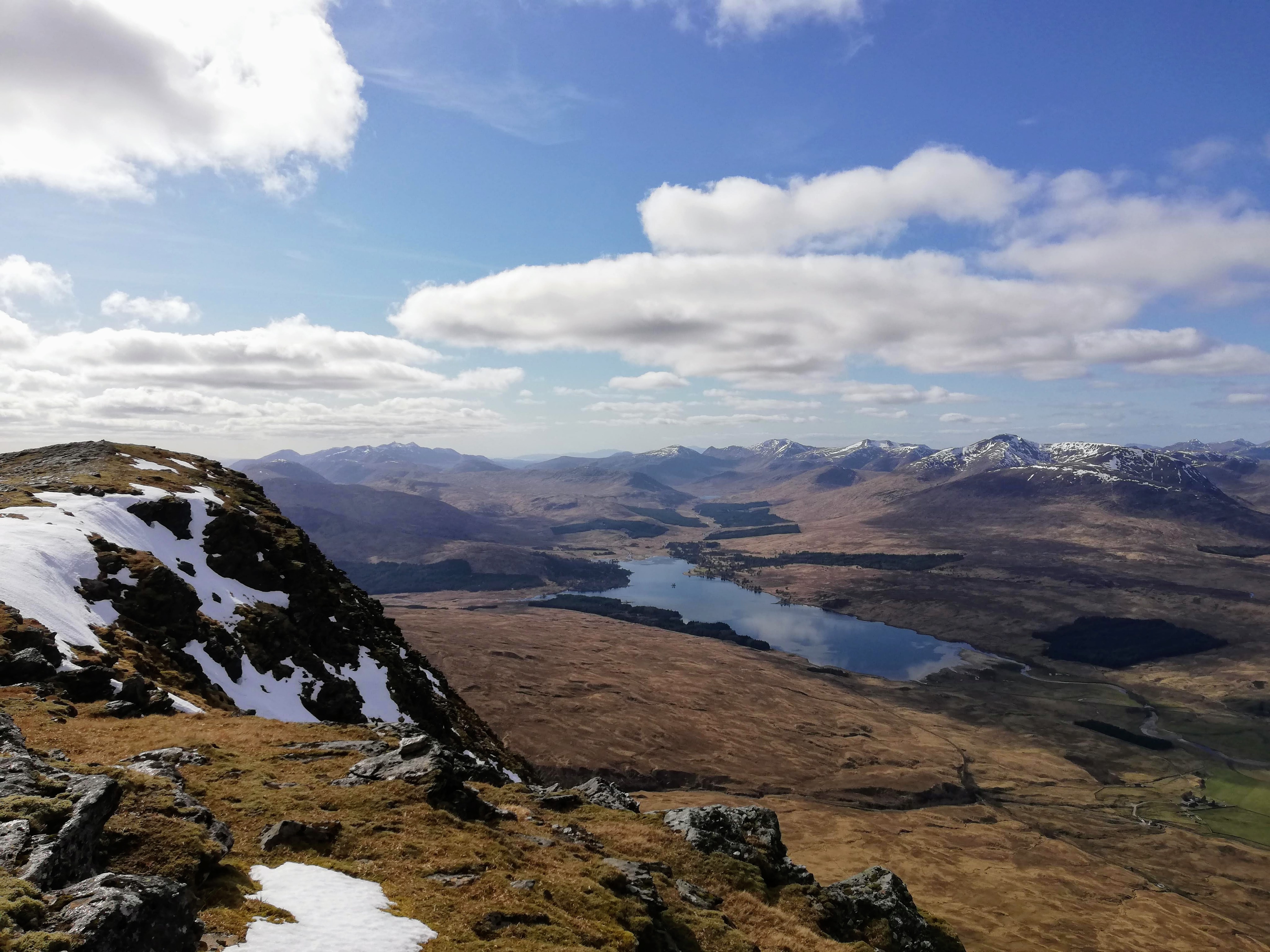 It took about three hours to reach this point but once on the ridge, despite a few snow patches still clinging on, we sped up considerably.

The visibility was utterly amazing: beyond the empty expanse of Rannoch Moor, the bulk of Ben Nevis stood massively above the Mamores, but in front of yet more rows of distant snowcapped mountains.

The emptiness that is Rannoch Moor. You can also make out the Buchaille and Ben Nevis (would’ve been clearer if my camera hadn’t had an empty battery and I hadn’t had to take all these on my phone…)

The summit of Beinn a Chreachain was easily visible and we paused to enjoy the views of endless mountains and the remoteness: we could see one house and no roads at all!

We dropped steeply off the summit and made our way across the slopes towards Meall Buidhe, where we could see north across the empty expanse of moor once again.

Now you can definitely see the Ben 🙂

The climb up to Beinn Achaladair is steep and more rocky, but once at the top, we could have stayed there for hours admiring the landscape.

Then began the descent via the ridge south to the bealach above Coire Daingean.

We filled our bottles in the tumbling Allt Coire Achaladair (totally delicious water!), before navigating the long, boggy path back to the carpark.

Getting a drink from Allt Coire Achaladair

We are so lucky that all this is only an hour and a half from home.

We could not have asked for a better day: it was simply beautiful and just reinforced how much we love exploring Scotland.

Comments: Do it on a clear day!

2 thoughts on “This is why we climb Scottish hills…..”

Gorgeous colours in the wood opposite our house during our run this evening! I'm not an inspired decorator but I always want to bring these bright woodland spring greens into our house #cjoutdoors #woodland #spring #green #run #staylocal #bluebells #scotland #stirling #wallacemonument #lovescotland
Hopefully it won't be too long until we can safely return to the hills. It's been a very long eight weeks. We've been very fortunate through all this, but we really miss the remote places we love. #cjoutdoors #mountains #scottishhighlands #munros #memories #fingerscrossed #hopeful
Brightness in the garden on a cloudy day . #flowers #peony #colour #garden #bright
Spring colours in the garden. Caught a bee fly enjoying this colourful pom-pom. Anyone know what it is? They came from a friend's garden and look like primroses until they flower. . #spring #garden #flowers #cowslip #perennials #colour #sunshine #stayhome #plants #pollinators #pollinatorfriendly #whatisit